(Excerpted from the  TCU Press release on the publication of his book,  In the Rough: The Business Game of Golf )

David Hueber grew up in the golf business. His father was a club pro, and David started out as a caddie, mowed greens, and played well enough to earn a golf scholarship at Florida State University. This led to a business career in marketing at the PGA Tour under Commissioner Deane Beman. He was vice president of marketing until he moved to the National Golf Foundation as its president and CEO. He then became president and CEO of the Ben Hogan Company when it was owned by Cosmo World, a Japanese company. He also served as president of Ben Hogan Property Companies, which owned Pebble Beach.

David earned his PhD from Clemson University in August of 2012, where his dissertation research focused on sustainable golf course development; he also holds a number of golf patents, including the invention of hybrid woods. David lives in Ponte Vedra Beach, Florida, with his wife Cindy. 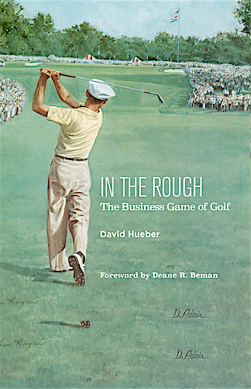 In the Rough: The Business Game of Golf

FORT WORTH, Texas – There has never been a book about the inner workings of the golf business or its leading players from an insider’s point of view. In the Rough  reads like a novel, but it also could be required reading in a college business school. This book takes the reader on a tour through the author’s unusual professional career and shares what he discovered in the most revealing settings and scenes of the golf industry at its awkward and colorful best. Most of the events and incidents are firsthand accounts portraying a host of famous and colorful characters in both professional golf and the business world.
The central characters in the book are Ben Hogan, one of the five best players of all time and a highly successful golf-equipment executive and businessman; Deane Beman, who was a star amateur and successful professional golfer, developed the modern-day PGA Tour and served as its commissioner for 20 years, and wrote the book’s foreword; and Minoru Isutani, a wealthy Japanese entrepreneur who is probably best known for having lost $350 million on the purchase and sale of Pebble Beach. Some of the other costars include Jack Nicklaus, Karsten Solheim (Ping Golf Company), Greg Norman, and Ely Callaway Jr.—all names you have seen etched on a wood, iron, or putter.

In The Rough
The Business Game of Golf